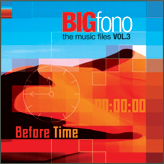 The music was conceived and composed as the soundtrack to a series of television programs on Dutch prehistory. It has been compiled in a very intense process between director and composer, unusual for a regular television program. The music is not composed in a ‘song’-like format but rather molded as a soundscape adapted to the program and enhancing the mood, the feel and the emotion. Listening to it takes you away to the beyond. This is ambient music with an unprecedented imaginative power. It really gets 2U! …. For optimal effect it should be played gently.

The Music Files Vol. 3, Before Time is a journey into sound and atmosphere. In music it explores new frontiers and boundaries and goes beyond them. Before Time unravels soundscapes never heard of before. In each movement a new emotion is discovered, a new perspective is mapped. It sets out on an expedition in search of the direct impetus sound and music can have on the way we experience reality.